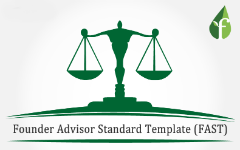 Use the FAST Agreement to Simplify your Advisory Relationship

FAST is a new agreement and framework for Founders to engage with strategic advisors.

The FAST Agreement is used by tens of thousands of entrepreneurs and advisors per year to establish productive working relationships, trading advice and support for a standardized amount of equity.

The Founder / Advisor Standard Template (“FAST”) was developed by the Founder Institute to help aspiring entrepreneurs in the startup launch programs that we operate worldwide set-up advisory boards and engage with the mentors that they interact with throughout the program. In 2011, the Founder Institute released the FAST Agreement to the public, and we have been making incremental updates on the Version 1 of the Agreement ever since. On August 1st, 2017, the Founder Institute has released Version 2, which includes a number of enhancements:

Using the FAST Agreement, you can check a few boxes, sign the Agreement and start working. There is no longer the need for cumbersome negotiation, legal drafting and review.

Thanks Boris. This is very helpful.